Today we are happy to announce that Hamilton Barbell is officially a registered club with the Ontario Weightlifting Association!

To compete in sanctioned events, the OWA requires that athletes register with them. In order to do that, the athlete must first be a member of an OWA-affiliated club.

We are happy to be the first to offer Hamilton a weightlifting club – we want to support local athletes interested in pursuing competitive weightlifting, and grow the community!

We are in the process of developing and scheduling programs for competitive and interested lifters with NCCP-trained coaches. There is a lot that goes on before and during an official event. We want to provide those resources to those who would benefit from this coaching. Stay tuned to hamiltonbarbell.com or watch for news on Twitter or Facebook.

Until then, email hamiltonbarbell@gmail.com for information about registration. We’d love to welcome you to the team! 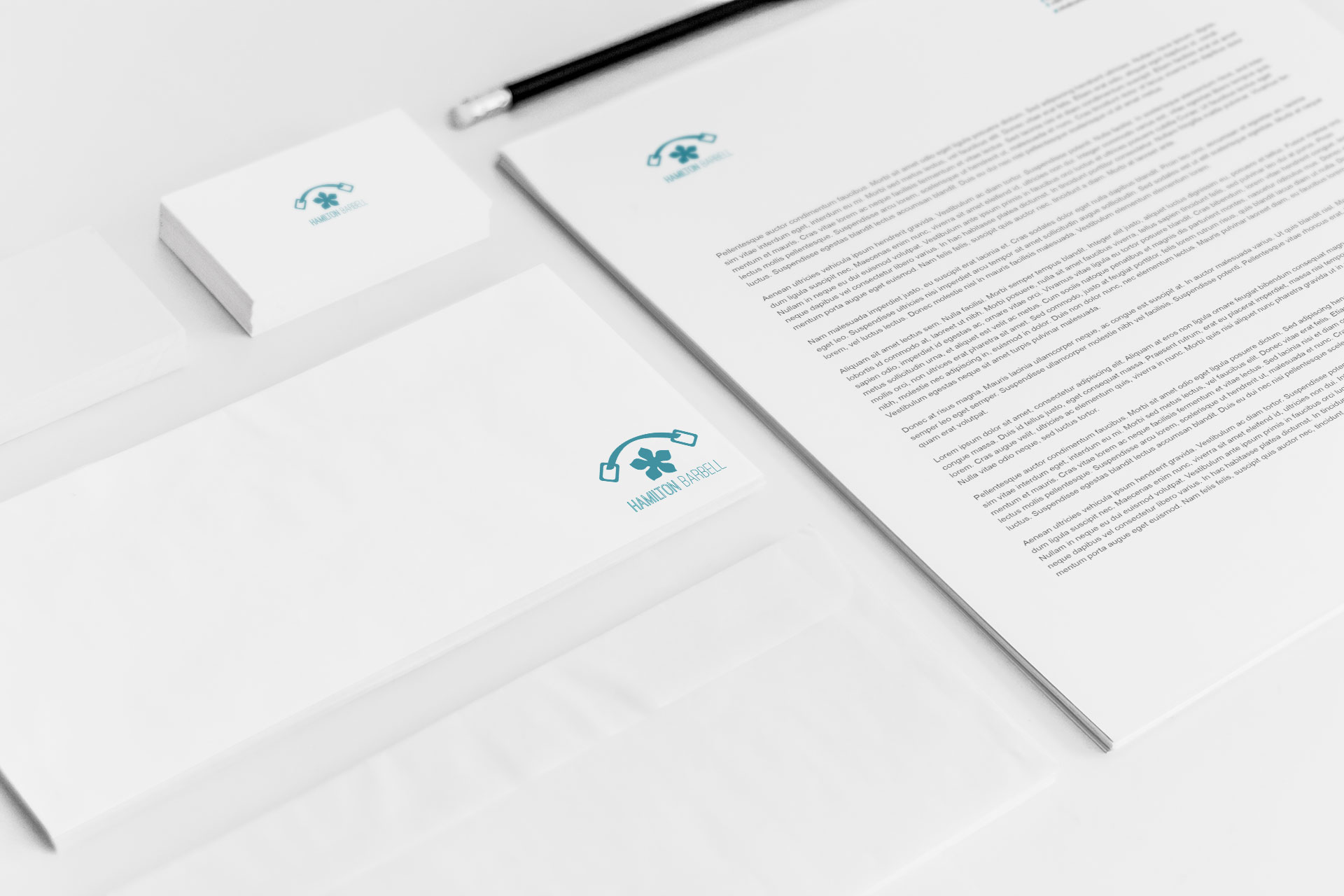 Hamilton Barbell was originally created to accomplish a social mission: to get more people fit by way of barbell training. We think it’s important to create a brand that communicates what this mission means to us.

A brand is the set of expectations, memories, stories and relationships that account for a consumer’s decision — Seth Godin

It is obvious in retrospect, but Hamilton Barbell wasn’t the first choice. Initially it was tempting to follow the ‘epic name’ path (using words like Elite, Machine, Victory, etc). These types of names evoke a certain perception of the culture – a focus on hard work and high performance. Since we have a broader community goal, however, these words did not feel inclusive enough.

Hamilton is Steeltown; the Hammer – again, very industrial connotations. It is also known as the Ambitious City, and that’s something that was fun to work with. There are a few sketches floating around for the Ambitious Barbell Club (ABC).

Work for the logo happened in tandem with picking a name. In fact, the creation of our current logo is what sealed the deal for the name – they just worked well together.

During research, I found that many barbell club logos are aggressive, bold and retro in nature to represent how intense they are. 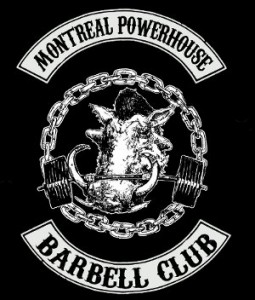 Research led to the cinquefoil (translates to ‘five leaves’) – a marque of Clan Hamilton which is found on the city’s flag and coat of arms. The links around the cinquefoil represent the city’s neighbourhoods. 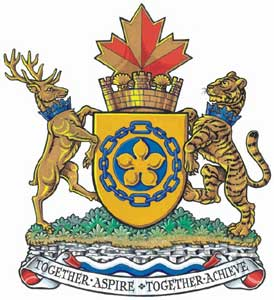 Using the cinquefoil as the focal point, a broad stroke connects two links – now weight plates – into a barbell shape.

The logotype process was similar. When looking at existing logos, the font choice was usually large and bold, sometimes with a vintage feel.

I looked for a lighter font that still packed a little impact. The search took me to the League of Moveable Type and the Ostrich Sans font-family. A balance of modern and classic combined with an open license? Sign me up.

Now here it is together in the original colours – yellow/royal blue: 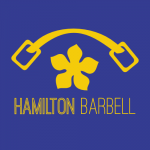 My first thought was that a gold/yellow logo won’t print well on white paper, so it would always be tied to a background colour. The gold did convey a very happy mood so we didn’t want to lose it altogether – instead we determined a colour scheme that remained lighthearted and that would work well behind a gold logo, or work as the primary colour itself.

Generally speaking, a brand’s visual identity is the overall look of its communications. Consistency is key when using elements to create distinction, such as specific fonts, colours, and graphics, including the logo.

All elements of the logo are available in vector format, which allows for crisp outputs at any size necessary. The mark and type work well on their own, but together also allows for a system that is easily identifiable. Aside, as an exercise I quickly whipped up what it might look like for other organizations:

The barbell is a constant, acting both figuratively and literally as an umbrella, under which the organization can put their unique mark. The type is simple, with the location emphasized with a different stroke. You can see that the order of words is a matter of preference; yet all logos are clearly from the same family.

This consistency translates well over mediums. 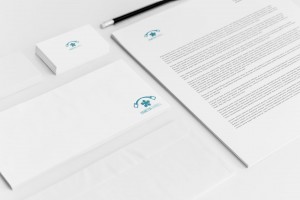 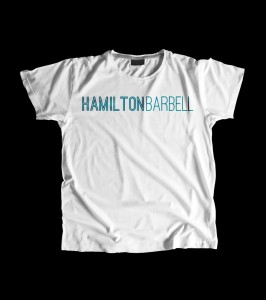 This was a very exciting project to work on. I feel like the logo is successful in representing Hamilton and strength training in a clean, modern and approachable fashion. Of course, a lot of hard work remains to build it into a respected brand that evokes quality and community – and I’m looking forward to that journey too.

Posted by hamiltonbarbell | General | No Comments

Hamilton Barbell is still very much a fledgling idea, but the ball is rolling and picking up speed. We’d like to share what we’re working on at the moment.

The application and payment for the club has been sent in to the Ontario Weightlifting Association for approval. Once it clears, Hamilton will have an official weightlifting club! This means that athletes can join Hamilton Barbell and compete in official sanctioned meets.

SportHamilton is a community group dedicated to the development and promotion of quality amateur sport for all in the Hamilton community. Hamilton Barbell has applied to be included as a representative and advocate for Powerlifting and Weightlifting.

Hamilton Barbell is looking to host both coaching and technical official clinics in Hamilton later this year. Tentatively aiming for December 2014, location TBD.

We have members actively pursuing coaching certifications – by the end of September we will have an NCCP ‘Certified’ Instructor Beginner coach and an NCCP ‘Trained’ Competition Introduction coach (both for Weightlifting) in our ranks.

Hamilton Barbell will be presenting at CoderCamp on Wednesday August 20th at The Pheasant Plucker. CoderCamp is a Software Hamilton gathering of local professionals exchanging knowledge – usually about code! This time we’ll be sharing knowledge about fitness for a demographic that spends its 9-5 seated at a desk. Tickets available for free at: codercamp.eventbrite.ca

This past weekend a group from Alchemy CrossFit brought a barbell out to Bayfront Park and threw together a few fun workouts. It caught a bit of attention and smiles from passers-by. It was a great time and hopefully something that we can organize on a more frequent basis.

All of this so far has been achieved with minimal financial input from each individual towards their own initiative (certification, club registration, website, etc.) As we look to host larger events for the community, we’re looking to evolve in such a way that Hamilton Barbell can sustain itself financially. To that end, a big thanks goes to Hamilton Economic Development for their help and guidance as we navigate those waters.